Here’s why ospreys are unique

Over 10,000 bird species grace our planet’s skies, but only nine occupy every habitat available to them. While two of the nine – pigeon and sparrow – are as familiar to us as cats and dogs, the other seven – short-eared owl, cattle egret, great egret, peregrine falcon, barn owl, tern and osprey – are hiding in plain sight.

They spread thanks to humans

Pigeons and sparrows are a common sight in pretty much every major city in the world. The short-eared owl also owes worldwide spread to the assistance of humans, having been introduced to parts of the world it never could have spread to alone. The cattle egret, although not personally aided by humanity, spread so widely thanks to human’s domestication of cattle.

They spread by themselves

This leaves five species of birds that have evolved the biological flexibility, hardiness, and survivability to thrive anywhere. Two species owe that fact to their ever-expanding number of subspecies. The peregrine falcon currently has nineteen accepted subspecies. It’s a little easier to be everywhere when there are so many types of falcon considered to be a peregrine. The same can be said for the barn owl. The Wikipedia entry for barn owl, under subspecies, just says “Many.”

The tern has only 5 subspecies, and the great egret and osprey both boast only 4. This makes the osprey incredibly unique, being the only bird of prey that thrives worldwide with very little biological difference between the ones that live in Vietnam, Nigeria, Sweden, Belarus, Saudi Arabia, Northern China, Kazakhstan, Peru, Cuba, or Portugal and the ones that live in the Pacific Northwest.

If you’ve ever spent time near water in the Pacific Northwest, you’ve probably seen an one, whether you know it or not. They’re everywhere near large bodies of water. It’s easiest to recognize them while they’re flying due to the unique, M-shaped bend of their wings.

This bend in their wings gives them the ability to lift heavier loads than other birds of their size. One of most powerful birds of prey, ospreys can fly with loads up to 40% of their body weight. Imagine trying to run with a 65-pound backpack on. They’re mostly dark brown on top, with a white underside and white head.

Their piercing call is also very recognizable, a shrill series of sharp whistles. Ospreys also conveniently place their nests where you can easily spot them. They like to perch their nests on top of tall, open areas where they can survey their surroundings easily. You will commonly see osprey nests on the top of dead trees, telephone poles, or bridges. There are several recorded instances of an osprey nest atop a telephone pole causing power outages! In May 2019, a small town in Massachusetts reported an osprey-related power outage that left 3500 homes and businesses without power.

Adult ospreys grow to be approximately two feet long with a six-foot wingspan, longer than the average American is tall!  Next time you’re near a body of water, look for a large bird hovering about 100 feet off the water. Maybe you’ll notice the white underside, or the M-shaped crook of its wings. If your lucky, you might even see it hunt.

What ospreys eat, and what eats them

Ospreys, as a bird of prey, are expert fishers. Even more expert than that uncle who brags incessantly about how “it was THIS big!” These birds exist on a diet made up almost exclusively of fish. Evolution has transformed an osprey into the perfect fish catching machine. Fun fact: the osprey are such successful hunters, there was a midevil belief that osprey hypnotized fish and simply plucked the unresponsive prey out of the water. What makes them such good fishers? They have several genetic adaptations that make them perfect fish hunting machines:

All these genetic adaptations have made the osprey able to succeed in catching a fish in one out of every four attempts (bet that uncle doesn’t catch a fish every four casts).

This skill in fishing has not gone unnoticed by other predators that share the osprey’s territory. Bald eagles, commonly found in similar hunting grounds, are the ospreys main predator. Bald eagles will prey on osprey eggs and baby osprey if the opportunity arises. They also exhibit behavior known as (get ready for a fun word to impress anyone who will listen to your newfound osprey knowledge) kleptoparasitism. Kleptoparisitism is a fancy word for eagles piggybacking off osprey’s fishing successes and stealing fish from them. Once an osprey has succeeded in a catch, it is not uncommon to see a bald eagle swoop in from above, attempting to wrest the fish from the clutches of the osprey.

The life of an osprey

An osprey starts its life with approximately 40 days in the safety of their brown and white, mottled eggs.

Once they hatch, they spend the next 50 days in the nest. While the ospreys are babies, the mother bird stays in the nest, protecting and warming her chicks while the father hunts for food. After three weeks, the baby ospreys have found their wings, and hover just above their nest, preparing to fly. First flight away from the nest typically occurs at around two months old. As they grow, they venture further and further from the nest until they are approximately five months old. At that point, the now-teenage osprey strikes out on its own.

As winter approaches, the osprey fulfills its biological destiny and heads south. Ospreys migrate every winter to nesting grounds in warmer climates. North American ospreys head to South America, for some as far south as Argentina. The ospreys will cover an average of 170 miles/day during this migration, but are able to max out at 250 miles in a single day for water crossings. Once the winter ends, the juvenile osprey returns to the area where it was born. After two to three years of solo survival and migration, the osprey reaches sexual maturity and will find a lifelong mate upon returning home from the wintering grounds.

The pair will build a nest of sticks, moss, and other available materials to raise their first brood, and the cycle begins again. Ospreys typically live around ten years but they have been known to live up to twenty-five years.

Congratulations, you know all about ospreys!

So, what are you going to do with all your newfound osprey knowledge? You’ve learned that the osprey is an incredibly unique bird, the only bird of prey that exists as a single species worldwide. You’ve learned how to recognize them, how they behave, and their life cycle. All this information makes you the perfect osprey spotter! So get yourself out there to your nearest osprey spotting ground. One of the best places in the Pacific Northwest to watch osprey in their natural, wild habitat is the Wild and Scenic stretch of the Rogue River. After pushing off from camp in the morning, it’s not uncommon to watch osprey hover above the river in the morning air, then suddenly plunge into the murky water and emerge victorious, a squirming fish clutched in its talons. If you’re interested in finding out more about these trips, head on over to check out Northwest Rafting Company’s Wild and Scenic Rogue River trips! 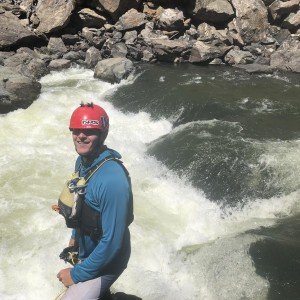 Dressing comfortably and fashionably for overnight river trips requires a little advance planning. You will want clothes to wear on the river and in camp. On the River 2+ Shorts or Swimsuits 2+ Shirts Lightweight Wool or Polypro Shirt River Shoes or River Sandals Hat for Sun Protection Sunscreen & Lip Balm Water Bottle Sunglasses with Strap River Clothes: For your daytime river outfit, you’ll want quick-drying clothes so that you don’t feel soggy all day. Wearing shorts with a lightweight long or short-sleeved shirt are… Read More