Maybe you’ve heard the roar of Lava Falls echoing up the canyon or maybe you’ve just heard about it. Any trip down the Grand Canyon comes down to the climactic moment of rowing Lava. But there is plenty of time to practice before you get to Lava at Mile 179.7 and there are specific rowing techniques that are important to know for the Colorado River. A river with the longest and most storied whitewater rowing history in America.

John Wesley Powell’s expedition rowed it first in wooden rowboats in 1869. Nathanial Galloway rowed it in 1897 and again in 1909, the first purely recreational whitewater trip in history. Following in their footsteps came a few more parties of adventurers rowing wooden boats. After the World War II, rubber boats and pontoons took the place of wood and the modern era of rafting was set to begin.

Oar Boat on the Grand Canyon

Grand Canyon guides have been rowing the Colorado in rafts since the 1950’s. There has been plenty of opportunity to develop techniques and understanding of the particular challenges of this big water river. The good news is that tens of thousands of people have successfully rowed it over the last 60 years.

Rowing Techniques for the Grand Canyon of the Colorado

The Colorado is a high volume river. There are few rocks to avoid. It’s rapids don’t require a lot of technical maneuvering and its current is very strong. The key to success lies in an accurate set up, entering the rapid at the exact place of your choice. Often, but not always, this is on a well-defined tongue. The speed and power of the water dropping into the rapids can be tricky to judge. So calibrating successes and failures in the early rapids will prepare you for the bigger ones to come.

The next important thing is hitting hydraulics straight. If you read your map and guidebooks carefully [see below*] you can avoid the most dangerous holes. But in even the smaller rapids, you want to keep your raft straight through waves and holes. This is a matter of lining them up, building forward momentum and digging the oars into the water at the moment you make contact.

Breaking through a wave by hitting it straight

Powerful water will spin a boat very quickly if it is not perfectly straight. Having the oars in the water at contact will allow you to instantly correct and hold your line. It also helps you bust through holes.

There are places on the Grand Canyon where you need a lot of power to make certain moves like missing the hole at Crystal or catching the eddies at the narrow mouths of Matkatamiba and Havasu creeks. Learning to use a downstream ferry angle becomes important. By turning the back of your raft downstream, you can put your back into your stokes. It takes practice and good timing, but can be decisive. The secret is starting far enough out in current and early enough to build momentum. It is a great move to know on any river and can easily be learned before venturing onto the Colorado.

And finally, something that plagues every person rowing the Grand Canyon is the challenge of eddies at the bottom of rapids. Staying out of them takes experience. But if you carry momentum from the rapid and aim well, it’s possible to avoid them. Get it wrong and you will end up on a big frustrating merry go round ride that wastes a lot of energy and time. Reading the swirling currents is not easy. A quick glance over the shoulder can help. Sometimes it is easier to read the flow behind the boat than it is in front. Or, use the pressure against your oar blades down in the water to let you know if they are in downstream current or upstream moving eddy water. But good luck with this one, it’s not easy. It takes a real Grand Canyon pro to do this consistently.

All of which inevitably brings you to Lava Falls where at many water levels, you’re going to run some world class hydraulics. Most people succeed! But Lava is the big daddy. Above a certain water level you can sneak left. But often you have to run the right side and this is where your practice setting up and running hydraulics will pay off.

Scouting Lava Falls in the Grand Canyon of the Colorado

You’ll want to keep on your line in Lava, hope the river gods are smiling, and that the big waves are pulsing at the right time. What adds to the difficulty, is that you can’t see the rapid from the approach. All you see from above the rapid at water level is a horizon line. You have to make a perfect set up by memorizing markers on the shore and in the water from your scout on the right cliff. Or from all the times you watched it on YouTube before you left home! Rowing Lava is the thrill of a lifetime and wild as it looks, it has been run successfully thousands and thousands of times.

How it feels to finish rowing Lava Falls

Rowing the Colorado always includes a few adrenaline soaked moments that you will anticipate for the whole trip. In reality, they comprise literally a few seconds out of a couple of weeks of incredible adventure and natural beauty. The vast majority of the whitewater is just plain of fun to row. Have a great time.

* I recommend the Guide to the Colorado River in the Grand Canyon by Tom Martin and Duwain Whitis as your mile by mile guide to the river . The best guide to running the rapids, is available for purchase only in Flagstaff Arizona where you begin the trip. It is called, Colorado River Briefs For A Trip Through the Grand Canyon by Linda Lou Lindemann and Dan K Lindemann. All the crucial rapids are diagrammed in this book. Carry it with you and you will not blunder blindly into any of the most significant hydraulics. Finally, I recommend, Day Hikes from the River in the Grand Canyon by Tom Martin. 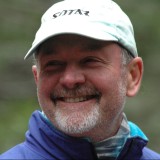 Peter was a year-round guide on the Tuolumne River in California and the Bio Bio River in Chile. In 1985 he was part of the first raft descent of the Futuleufú River and he led the televised first raft descent of the Grand Canyon of the Stikine River in British Columbia. He now instructs our rowing schools and guides our trips to Bhutan with his wife Susan. Both his children now work as river guides for NWRC.

A few rapids loom larger than others when river guides tell tales around the campfire. Here's a list of the biggest rapids from a river guide's perspective - in alphabetical order. Not big enough for you? If you’re an accomplished kayaker or extreme rafter, you’ll want to scroll down to the bottom of this page to see a round-up of rapids that are bigger, but not commonly discussed among river guides. 1. Blossom Bar (Rogue River, Oregon) You don’t get to be known as "the most...

Disclaimer: Northwest Rafting Company receives a small commission when you click some of the links on this page and purchase items through Amazon. Whitewater paddlers should carry safety kits and obtain safety/rescue training - especially on rivers that are Class III and harder. Safety kits (also known as "wrap kits" or "pin kits") contain equipment that can be used to unpin rafts, rescue trapped swimmers, and/or transport people and gear around dangerous rapids. A few years ago I wrote an article about the heavy duty outfitter...