The sun begins its daily ritual of warming, of basking. I squint my eyes across the water watching its beams break on the river’s surface and fracture into bright and brilliant blues and greens. It’s an emerald kingdom unlike any other whose long-term residents include sturgeon, steelhead, salmon, osprey, eagles, bears and, for the next five days, us.

I hear the gravel crunch under tires and turn my gaze away from the river to watch the rest of our people pile out of our NWRC 15 passenger van. They’re here. Our row school. Nine folks, new to this river, cautiously make their way across the beach towards our armada of boats. They seem shy, softly sliding their way into a circle for our opening speeches, looking to make the least amount of waves, somehow trying to seem confident without breaking the surface tension of a new group.

That will all change.

Everyone here is finding his or her way into a new adventure, an entirely different culture, and another world. They’ve come for this sun-kissed, standing-wave sanctuary still seemingly inaccessible to them. They want to find the freedom to wander into and out of this emerald river world at will: they’ve come to learn to row. In truth, they’ve come for the keys to this bright, shining kingdom.

With the thought of keys and kingdoms, my mind instantly flashes to deep, dark, back-alley scenes where striped suited mobsters in gravelly, leering voices whisper “so you want the keys to da kingdom, do ya? I’ll show ya da keys…” before pouring on cement shoes.

But this vision doesn’t last long, and splinters back into reality as I glance across the rounded stones on our own graveled beach as five young men walk away from the boats they’ve been rigging. These aren’t shadowed, sinister men begrudgingly sharing their secrets at all; they glow, instead, as if they’ve found the infamous fountain Ponce de Leon spent his whole life searching for. These are men who have worked for Northwest Rafting Company for years. Men who have been baked brown by boating this particular stretch of river dozens of times. These are men who have mastered the ultimate craft: doing what they love, for a living.

Not only do they seem to exude fitness and finesse, but also wisdom. Real. River. Knowledge. And they’re more than willing to share everything they’ve ever learned with this eager and enthusiastic, albeit a little awkward group. In the space of five days, this group will learn the wisdom and knowledge necessary to boat class III water, independently, successfully, and confidently.

Our group meanders their way toward the waiting cats, choosing boat & oars, and inadvertently setting the stage for the understanding of what set-ups they like best. Oar locks? Oar rights? Pins and clips?

Decisions play out amidst the brilliant backdrop of a long, gentle eddy and, over time, we find ourselves schooled in the ever-important ‘two-points of contact’ between your boat and the gear you undeniably want to stay in your boat. Our group, lead by our guides, is beginning to understand the finer arts of boat rigging.

We leave the beach.

But all great stories begin at the beginning; and for all great endeavors that means stumbling your way to and through ‘unconscious incompetence’ … better known as play. In the space of a few seconds everyone is alight with that little-kid-like-glow: Excited. Nervous. Learning. Some are too cautious to venture far from shore, others charge headlong out into the current. Everyone, absolutely everyone, is playing.

“Today” says one of the guides, “it’s all about moving the boats.”

As it turns out, the next four days are filled with exactly that: moving boats. In ever-increasing complexity our subtle, shy group of guests become comfortable in their own sun-kissed skin. Slowly, ever so slowly, the wisdom and intelligence of the guides unlocks doors to pieces of deep understanding in everyone. Lunch-time talks in splendid and glorious locations impart the nourishment of river reading. There are discussions about understanding eddy waters, and ongoing conversations about how to utilize the existing, underlying current.

There is the ever-present understanding of holes, waves, and other water features: are they ‘happy?’ ‘Sad?’ ‘Good?’ ‘Bad?’ ‘Surfable?’ And, in a more advanced piece of the river kingdom, the inherent understanding of how to use all of these, intentionally, to change angle, momentum, and force while on river.

At night we watch video taken of lines taken in the rapids ran that day, picking up pieces of strategy and sparking further talks about technique. The casual cast of characters that slipped so shyly together on day one is now talking in an entirely new vernacular. There is talk of loved ones. Of music. Of pure, unadulterated sweat and stench. Of Dutch oven cooking, and even the fine-art of groover use.

We eat together. We drink together. We all fall asleep to the antagonizing exhaustion of long-tired muscles that urge us on, on, ever on in the quest for finding the truest, most efficient, rowing technique.

We’ve become a hodge-podge family, floating an army of boats, fit together through waves, water, and work.

We scout, we read, we run; as a team, in this new kingdom, in a culture all our own. Oar management becomes automatic. Eddy catching, second nature. Ferrying across current, even upstream, starts to look like finesse work. There are even flipped boats, intentionally, so that safety becomes second nature. All the fine-wrought details of knot tying and z-line creation become accessible topics for practice and conversation. No question is left unanswered.

I watch from the shore of our last night’s camp as all our boats pull into an eddy, equally as green, expansive, and emerald as the one we launched into so seemingly long ago. The awkward and adolescent image of iceskating has vanished. In its place is a delicate and graceful flourish of oars, bow lines, and gear boxes. Everyone angles into the eddy fence, finds their way to the beach, ties off and unloads with the seasoned look of long-time professionals.

The river changes you.

Somehow, under the careful tutelage of amazing guides, amidst the sprinkles, sun and swirling currents it’s happened: they’ve earned the keys to this bright, brilliant beacon of exploration and escape. They have learned to row. 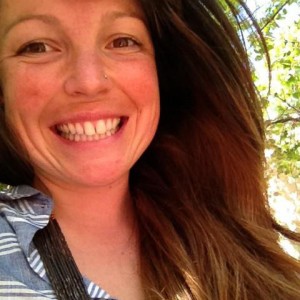 Nicole is a California native whose outdoor addictions have transported her from the tropics of Costa Rica to the alps of New Zealand, and everything in between. When she's not out getting her fix on white room turns, dusk lit fly casts, and deep river gorges she satiates her other die hard habit: helping people heal as a chiropractor. "I have an amazing job, really. If I'm not out using my own body and appreciating nature's inherent awesomeness, then I'm helping other people heal, so they can." Managing Risk on the River: A rafters guide to “safety” “Safety first,” is an expression I hear often on the river. However, I would argue that safety is an illusion. There is an inherent level of risk we all accept every time we go rafting. The best thing we can do is work to manage that risk and bring it down to a level we find acceptable. We can measure risk by weighing the consequences of a hazard with the probability or likelihood that it will… Read More

An Interview with Kaela Fox of Serenade This week I got to know former raft guide and current co-owner of Serenade, Kaela Fox. She and her partner (& fiancé!) Austin organize beautiful events in and around Portland, combining their two passions: local food and local music. Once a year they bring those two lovely elements to our Serenade Rogue River trip, making for an incredible feast of the senses. 1. When did you start working as a river guide? I started working for ECHO River Trips in 2011. As the child of former… Read More