If you are lucky to run one of the whitewater rivers of the former Soviet Union you certainly will see the most popular whitewater craft – paddle catamaran. These appeared in the 60’s and 70’s and led to the Russian whitewater revolution – exploration and running the most difficult and dangerous rivers in Siberia, Pamir, Tian Shan’, and Caucasus mountains. It also led to expansion of rafting to some remote, almost inaccessible rivers.

Since their original appearance, the catamaran’s design went through dramatic evolution, which you may see in photos below, but major features remained the same: two parallel tubes connected with frame and 2-4 paddlers on the top of these tubes. Russians practically never use oars with their cats.

Vladimir Gavrilov’s book Rivers of and Unknown Land is a complete guide to rafting and kayaking in the former Soviet Union. You can purchase a copy from him directly via PayPal.

The first worldwide rafting competitions in 1989 demonstrated superiority of 4-person catamarans (Cat-4) to rafts as they were assigned to compete as same class of boats. The hand-made Cat-4 boats were significantly faster and more maneuverable than rafts. After that fiasco, the World Cup organizers separated cats and rafts as different boat classes for all future competitions.

The Design of Russian Catamaran

Catamarans begin with two inflatable tubes. Initially they were long canvas bags filled with volleyballs. Eventually it came to sleek shape: “Banana”, “Camel”, etc. Some shapes were designed to increase tube’s volume and/or provide additional safe storage. All modern tubes have dual chambers. The outer tube is made of plastic enhanced fabric (similar to tarp on big trucks). The purpose of this tube is to provide desirable shape. The inner tube has a bigger volume than outer one and is air-proof. Therefore the material of the inner tube is never stretched so that even if the outer tube is damaged, the inner one will very often will continue to hold air.

Initially paddlers sat on their butts on the tubes. In Latvia, a very popular was a design of Cat-2 where paddlers sat between tubes and used kayak paddles. By the 80’s, paddlers changed position: they moved from their butts to their knees – to a canoe paddler’s position. The paddler’s knees are fixed with easily released belts. The canoe position gave a very significant technical advantage to paddlers. I am very proud to be a person who put Ukrainians to their knees (no relation to the present political situation). I ran the Matcha River in the Pamir Mountains with the Ukrainian team and convinced them to try the new-for-them canoe position. Now they are paddling on their knees ever since this time.

We tried to keep the frame free of cargo and as a rule, loaded our dry bags on the tubes. It decreases water pressure on the cat which is very important for heavy water. The deck between tubes is a purely American invention, and one of reasons why catarafts here sometimes get surfed in holes. Catamarans are very flip resistant, especially the Cat-4. During my 20 years of experience of running rivers in the USSR, hundreds of Class V-VI rapids I had only two flips on Cat-4 (it was my main boat those years), both in Class VI rapids. I would never be even close to this record if I would use raft or US made cataraft on these rivers.

Many rivers in Russia are accessible only on foot (2-10 days of hiking with 100+ lbs on your shoulders). There is no question that there is a little to no chance to get a raft, oars, or hard shell kayak to such rivers. In forested areas Russians build wooden frames. They are stronger than metal ones and easy reparable.

An axe is the #1 tool for travel in outdoor Russia (ask Zach – he has one from Siberia). Peculiarities of wilderness travels in Russia led to many innovations and designs new for Americans. The catamaran is one of them. We invite you to our Siberia trips and you will see many more. 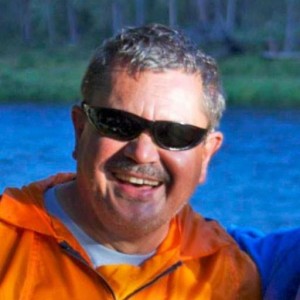 Vlad came to the United States in 1992 after a career as a research scientist studying radiation physics. He has a double PhD in Solid State Physics and has written over 100 scientific publications. For 20 years, he led expeditions all over the former Soviet Union during the early days of whitewater rafting. He wrote the guidebook Rivers of an Unknown Land about the many wild rivers of the former Soviet Union. Vlad has guided in northern California and Idaho since the 1990s.

Managing Risk on the River: A rafters guide to “safety” “Safety first,” is an expression I hear often on the river. However, I would argue that safety is an illusion. There is an inherent level of risk we all accept every time we go rafting. The best thing we can do is work to manage that risk and bring it down to a level we find acceptable. We can measure risk by weighing the consequences of a hazard with the probability or likelihood that it will… Read More

When river guides banter around the campfire, conversation usually turns to the biggest rapids and the best river trips in the world. Although everyone has their favorites, the list of legendary rivers is almost always the same. 1. Middle Fork of the Salmon River (Idaho) In my opinion, the “Middle Fork” is the best river trip in the world due to its 100 miles of continuous Class III and IV whitewater, clean water, great camps, world class fishing, hot springs, and abundant wildlife. It ends in… Read More