Rivers are the saws of the Earth, cutting their way through millions of years of lava flows and landslides to create the canyons we see today. The Rogue River is one of these canyons. It was formed with the Klamath Mountain range and yields some spectacular geology, some of which is more than 150 million years old.

From the start to the end of the trip, boaters float through three geological formations.

This is some of the most erosion resistant rock in the lower Rogue canyon, creating the dramatic rapid for boaters to navigate their way down. The type of metamorphic rock seen here is Gneiss and Serpentine.

The interruption of the Rouge Formation is due to a submarine avalanche of rock from ancient coastal ranges east of the Rogue. This new layer of rock created the Dothan formation. It spread across the Rogue Formation starting at Tyee rapid and remaining on top until China Bar.

The rock outcropping that forces the river to make a left bend at Tyee rapid is a great example of the Dothan Formation. The color and texture difference of this outcropping are more noticeably seen in the reds, browns and rougher grain. If you’re paying attention, it is easy to notice the start of the geological change to the Dothan Formation here.

An large mound of rock, primarily composed of quartz, forces the river to make an impressive 180 degree turn. While big enough to force the river around it, the more erosion prone Dothan Formation is evident here where the river has started to eat away caves along the river level rock.

Finally, the Flournoy formation emerges around Tate Creek and continues down to take out at Foster Bar. The geology changes dramatically from metamorphic rock to sedimentary rock and is easily seen in the conglomerate rock. This formation is the softest formation, most easily eroded, which is evident by the widening of the river canyon.

Conglomerate – is a coarse-grained clastic sedimentary rock that is composed of a substantial fraction of rounded to subangular gravel-size clasts, e.g., granules, pebbles, cobbles, and boulders, larger than 2 mm (0.079 in) in diameter

Metamorphism – the act of altering the composition or structure of a rock through intense heat and pressure.

Metavolcanic – Metamorphic rock that is formed from volcanic lava and then buried under more rock only to be morphed and recrystallized again by metamorophism.

Metasediment – Sedimentary rock that is altered and deformed through metamorphism. 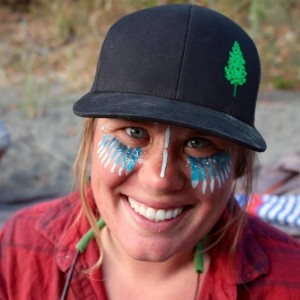 Emily grew up in the very northwest corner of Washington, but found her passion for whitewater on the Rogue River. She learned to kayak at age 12 with Sundance Kayak School and has been in love with rivers every since. Emily splits her time guiding in Oregon and Idaho during the North American summers and in Futaleufu, Chile for the South American summers. Emily is in her "happy place" when she is on the river or in the mountains.